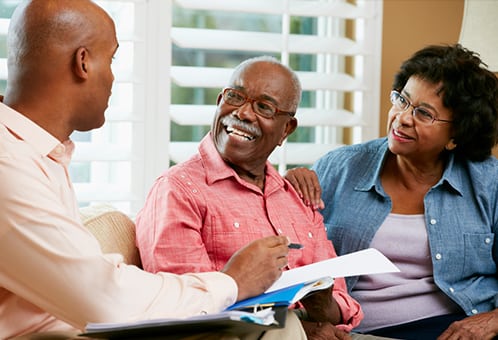 Family was recommended by a financial advisor to Goldberg Law Group for possible elder law planning for their elderly father. Due to high income and a generous long term care insurance policy, Eric determined that elder law planning was not appropriate. However, the gentleman’s assets exceeded the New Jersey estate tax threshold of $675,000 and Eric saw an opportunity to save the beneficiaries some money. An irrevocable estate exclusionary trust was created and funded. The elderly gentleman passed away at 93 years old. Through careful planning the beneficiaries saved $83,000 in estate taxes.

Family retained Goldberg Law Group to file a Medicaid application for their father who is suffering from dementia. The married couple had no liquid assets but owned a Medicaid exempt primary residence. Eric recommended transferring the residence to the non-institutionalized wife. Importantly, Eric also recommended re-drafting the wife’s Last Will and Testament to leave the institutionalized husband’s share to a Supplemental Needs Trust (“SNT”) which would allow him to remain on Medicaid should the wife predecease him. Unfortunately, the seemingly healthy wife predeceased the institutionalized husband. The house (minus the elective share) was placed in the SNT allowing the children to inherit most of the home. Without proper guidance, the proceeds from the entire primary residence would have gone to the facility rather than to the children who urgently need the money to pay for their own disabled children.

Family hired Goldberg Law Group to plan for a 70 year old gentleman who mysteriously began to suffer from dementia. Eric recommended funding an irrevocable trust and changing beneficiary designations accordingly. During the document collection phase Eric noticed a guaranteed renewable life insurance policy on the husband that was due to expire six months later. The current premium of $1,500 per year would increase to $7,000 per year were they to exercise the guaranteed renewable option. Eric contacted a life insurance professional who was able to use the guaranteed renewable option to purchase a much less expensive policy with $110,000 in death benefit. Unfortunately, the gentleman passed away one year after retaining Goldberg Law Group. However, because of our due diligence and the fine work of our insurance agent colleague, the family inherited $110,000 more than they would have had they never worked with us.